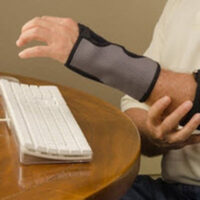 Imagine the most bizarre way in which someone can possibly get hurt, and it has likely happened at work. However, the vast majority of work injuries are caused in the same few ways: slip and falls, overexertion, overuse injuries, motor vehicle collisions, falls to a lower level, being struck by an object, and lifting or handling objects. According to PRNewswire, overexertion and falls on the same level have consistently been the top two causes of injury in the workplace.

Overexertion Due to Handling an Object

According to Liberty Mutual Insurance, the largest portion of workers’ compensation claims ($14 billion annually) is attributed to overexertion caused by handling objects. This is essentially a technical way of saying that an employee threw their back out while lifting a box, for example.

Another type of overexertion, or “bodily reaction,” is caused when a worker’s body breaks down from working too hard or in difficult conditions, and does not involve an outside source. An example of this is a construction worker who develops heat stroke or heat exhaustion while working hard on a hot day.

A repetitive strain injury (RSI) is caused over a long period of time by doing the same movement or motion, or even sitting with bad posture, for months or years. Examples include developing carpal tunnel syndrome from typing, arthritis in the back from bending over and picking up objects, and tendonitis in the knee from squatting.

Slip and Falls to the Same Level

A slip and fall can result in serious injury, even if the employee is young and healthy. Common injuries include fractured clavicle, sprained wrists, traumatic brain injuries, and contusions and lacerations.

Falls to a Lower Level

A fall to a lower level is usually much more serious than a slip and fall to the same level. This can include falling down a set of stairs, falling as a construction worker off a roof or off the side of a structure, or falling from some other source of height.

Traffic collisions can involve construction equipment being moved across a work site or it can be on the roadways with passenger vehicles or commercial trucks. Distracted driving, speeding, and aggressive driving behaviors all make the roads more dangerous for those who have to travel them during work.

No matter how you were injured, and regardless of who was to blame, you have the right to file a workers’ compensation claim to ensure that your medical expenses are covered, and that you are paid wage replacement while you heal. Call the Law Offices of David M. Benenfeld, P.A. today at 954-807-1334 to schedule a free consultation with a South Florida workers’ compensation attorney.