More Can Be Done to Reduce Deadly Car Accidents 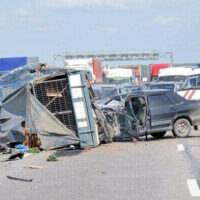 Every day in the news, you probably hear about a car accident that occurred in your city or you pass by a crash on your way to and from work. Unfortunately, auto accidents continue to occur because drivers fail to obey road rules and keep their eyes on the road, hands on the wheel, and mind on driving.

Although traffic fatalities fell to a low in 2014, the numbers reveal that fatal traffic crashes rose to an alarming rate during the first half of 2015. According to the National Highway Traffic Safety Administration (NHTSA) administrator Mark Rosekind, fatal traffic accidents increased 8.1% over the first six months of 2015.

Although it’s only normal that accident rates go up during a time when gasoline prices are down due to more people driving, the number of fatal crashes has spiked way faster than expected for the number of miles traveled. Rosekind attributes the increase in fatalities to texting and driving and other forms of distracted driving.

Because texting and driving and distracted driving involving cell phones account for many serious crashes and deaths on our roadways, state governments could do more regulating the use of smartphones, says Rosekind.

Because traffic deaths are preventable, the public as well as government leaders need to do a better job of creating safer streets and highways for the motoring public. In fact, better laws are needed to help reduce the large number of traffic fatalities. If there were tougher laws or more police officials on the roads to enforce distracted driving, speeding and drunk driving, many victims’ lives would be saved.

Although states need to do more in regards to improving driver safety, drivers also need to do a better job of refraining from using their cell phones from behind the wheel, designating a sober driver, and always buckling their seat belts.

“Better laws are needed on speed, drinking and driving, use of motorcycle helmets, seat belts and child restraints,” said WHO director-general Margaret Chan. Making motorists safer not only includes better laws and enforcement, but it can also include better safety features on vehicles, cited the WHO report.

How the Law Can Help

Until that day comes when car manufacturers stop reducing safety for larger profits, drivers stop texting from behind the wheel, better laws are in place, and more police officers are enforcing the law, deadly traffic accidents will continue to occur. When fatal wrecks do take place, families of the deceased need to be informed about their rights to justice and just compensation.

While no lawsuit or amount of money can ever bring back a loved one, families who have lost their loved ones in crashes need to consider pursuing a legal claim for their emotional suffering, financial losses, and much more. If you have lost a family member due to someone else’s negligence at the wheel, please call the Law Offices of David Benenfeld at 866-9 HELP NOW or 866-943-5766 to speak with an experienced accident injury attorney in a free consultation today about a wrongful death lawsuit.

By David M. Benenfeld, P.A. | Posted on January 30, 2016
« Did You Experience a Slip and Fall Injury in a Store’s Restroom?
Are Your Tires Registered for Recalls? They Might Not Be »