Nursing Home Abuse is Grossly Underreported in the United States 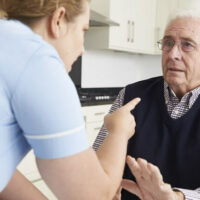 The numbers are in from a recent government study, and they further prove that 1 out of 4 cases of nursing home abuse have gone unreported.

The agency faults Medicare for not enforcing a requirement for nursing homes to notify law enforcement about potential cases of abuse.

The Health and Human Services inspector created an early alert as they began their investigation because preliminary findings in 33 states revealed an alarming number of unreported abuse cases.

Right now, 1.4 million adults live in nursing homes across the country. With so many cases of abuse and neglect going unreported, this is a severe national health and safety issue.

Of the unreported cases, HHS found that 4 out of 5 involved rape or sexual abuse. The state of Illinois had the highest number of cases, with Michigan, Texas, and California following close behind.

What is Nursing Home Abuse?

The various forms of abuse in those categories are daunting and include everything from withholding food and water, to inadequate supervision, to allowing patients to develop life-threatening infections.

The most common types of nursing home abuse seen today include:

What Can Loved Ones Do if they Suspect Abuse?

If you suspect that your loved one is a victim of abuse, contact law enforcement immediately and report it. Then, seek advice from a nursing home abuse attorney. An attorney can advise you on what steps you should take next – and help file a lawsuit against the nursing home, employees, or owner of the nursing home company for compensation.

The attorneys at The Law Offices of David M. Benenfeld P.A. can assist you with your nursing home abuse case.

By David M. Benenfeld, P.A. | Posted on November 20, 2017
« Can I Be Fired While on Workers’ Compensation in Florida?
Your Car Accident Responsibilities in Florida »