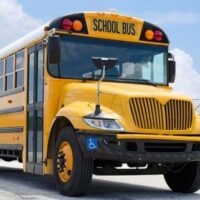 Big yellow school buses are frequent sites on the road in the early morning and afternoon hours, as they transport kids to and from school. Although school buses are actually the safest way for children to get to school, according to the National Highway Traffic Safety Administration (NHTSA), they are not completely safe as NHTSA estimates that four children die in school bus crashes annually and many more are injured.

Some of the causes of school bus accidents include:

Whatever the cause of a school bus crash, children often get hurt as a result. One of the many reasons why children suffer injuries in school bus accidents is due to the fact that there is no federal school bus seat belt law. This means that there are more school buses in this country that do not have seat belts than there are that do. The reason for this is because it cost a lot of money to retrofit school buses (about $7,000 to $10,000 per bus) and because the government hasn’t issued a federal mandate requiring seat belts on school buses.

The statistics prove that seat belts save lives, which is why children should be provided with this safety as they are transported to and from school on big yellow buses. Please spread the word about this important safety topic by sharing this article on Facebook with your family and friends.

In the event you need a personal injury lawyer after a school bus accident, please call the Law Offices of David Benenfeld at 866-9 HELP NOW or 866-943-5766 for a free consultation today.

By David M. Benenfeld, P.A. | Posted on January 20, 2016
« Reducing Drowsy Driving Truck Accidents: Truck Drivers to Log Their Time Electronically
Find Out If Your Child Should Be Riding With or Without a Booster Seat »