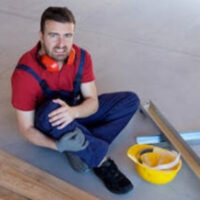 You might not have known the name of the photograph “Lunch Atop a Skyscraper” until now, but you probably have a clear mental image of it, even if it has been years since you last saw it.  The sight of construction workers with lunchboxes, sitting on a crossbeam, with their legs dangling 69 stories above New York City.  The photograph was taken in 1932, at the nadir of the Great Depression, during the construction of Rockefeller Center.  It is a reminder of the dangers construction workers face in order to accomplish their work.  Even in buildings a fraction of the size of Rockefeller Center, falls are the leading cause of fatal accidents at construction sites.  A South Florida workers’ compensation lawyer can help you get the compensation you need after a serious injury resulting from an accident at a job site.

The Occupational Safety and Health Administration (OSHA), part of the U.S. Department of Labor, requires contracting companies that work on roofs and other high-off-the-ground areas of buildings to follow proper fall prevention procedures.  Hough Roofing, the company responsible for a roof replacement project at a church in Melbourne, did not do that, and the consequences were disastrous.

The accident took place in March 2019, when Timothy Kendrick, 52, was one of five men installing metal beams on the roof of the Greater Allen Chapel AME Church, a two-story building.  It had recently rained, and the workers did not have proper fall prevention equipment.  Kendrick, who was working near the edge of the roof, slipped on the wet surface and fell 23 feet onto the ground.  Firefighters attended to him at the scene, and then he was transported by ambulance to a nearby hospital, where he died several hours later.

An investigation by OSHA found that Hough Roofing was negligent in the following regards:

The company reached an informal settlement in regard to the accident; the settlement included a $18,375 fine paid to OSHA for safety violations, news reports did not disclose how much Kendrick’s family received in the settlement.

When Workplace Accidents Are More Than Just Bumps and Bruises